"Intelkom" presented gifts to the winners of child's holiday 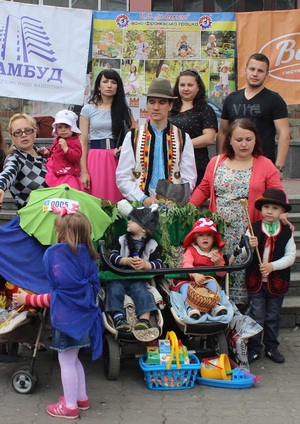 The cool event happened in Ivano-Frankivsk's Vichevyi Maidan on the 31st of May. Babies and their parents favorite celebration "The prams'parade" has been taken place for ten years without any breaks. The company's representative,the head of the sales'department Andriy Tsebriy appreciated participants and presented gifts for the winners.


"The prams' parade" is also called the most peaceful parade in the world.Its aim is to celebrate The International children's Day. The main part of the event is the process of the best child's pram choosing. Jury valued the creativity of prams'decorations.The main demands were-interesting idea,bright design and appropriate presentation of the first babies'cars. Traditionally everybody who wanted could take part in that show. 12 parents became the most active participants and designed original prams for their own babies.


At the end of the event every participant was given different presents: sweets, toys and other useful things. All children received wonderful presents from " TechnoK" brand.